In 1913, the following was written: "The Mackey mines, consisting of 13 claims, controlled by A. P. Mackey of Denver, adjoining the Tohoqua have been taken over under a long term lease by George D. Johnstone and associates of Los Angeles." <ref>Good Returns on Washoe Ore," November 9, 1913. </ref>

July 2, 1921: "Leadville The fourth shipment of concentrate has been made by the Leadville Mines Co operating in northern Washoe county 40 miles from Gerlach on the Western Pacific. The concentrate is sent to the Western Ore Purchasing Co sampler at Hazen. These shipments average about 225 oz silver and 50 lead per ton and the net value of each shipment is $6500 to $7000 The mill-heads assay 20 oz and treating 30 tons of ore daily three tons of concentrate is produced .An electric locomotive is used to haul the ore through a 1700 ft tunnel to the mill. The ore is a sulphide that is treated by flotation."<ref name="mining1921">Mining and Scientific Press, p. 33, 343, 907. Volume 123. Includes photo of Leadville. See also https://archive.org/details/miningscientific123sanfuoft</ref>

September 3, 1921: "Gerlach The Leadville Mines Co is shipping monthly four carioads of concentrate worth $150 per ton or a gross monthly production valued at $30,000 from the treatment of 30 to 35 tons of ore daily.<ref name="mining1921"/>

December 24, 1921: "Gerlach A. A. Codd is planning more extensive development of the property of the Leadville Mines Co. During this year the gross production has been more than $153,000 which is a good record considering that shipments were not begun until after July 1. All of this production has come from between the 190 and the 300 ft levels Codd now purposes to sink to the 500 ft level and begin drifting at both the 400 and the 500 ft levels The mill is well equipped and the ore is concentrated to about 6 into 1 This gives concentrates of about $200 per ton The mill is now handling an average of 35 tons per day which will be increased to 50 tons. A new 75 hp boiler is being placed which will give the needed extra power."<ref name="mining1921"/> 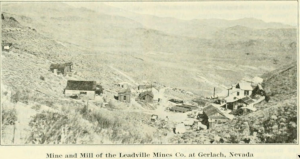 Mine and Mill of Leadville Mines Co. at Gerlach, Nevada, ca. 1921

In 1922, Leadville Mining Company, Gerlach, was listed as having 45 employees.<ref>Directory of Industries," State of Nevada, 1922.</ref>

The 1922: "There was more activity than usual in the Leadville district The Comrade Silver and Leadville mines were operated and both produced silver lead ore. Most of the output was milled in a 50 ton flotation plant of the Leadville Mines Co which was improved during 1920"<ref name="mining1922">"| Minerals Yearbook]," p. 335, US Bureau of Mines, Geological Survey (U.S.), 1922.</ref>

Sphalerite (ZnS) was found at the Comrade Mine.<ref>| Comrade Mine (Mindat)</ref><ref>"| Minerals of Nevada, Issue 31]," Stephen B. Castor, Gregory C. Ferdock, p. 413. The Keck Museum is the the source of the citatation.</ref>

The mine was operated selectively at the 700 foot level until it was closed in 1928 by Mine Inspectors orders. The 1944 Bulletin stated that "Two of the last leasers, Ogle Swingle and Ben Cassidy, now live in the vicinity of Gerlach." <ref name="bulletin41-46"/>(Was Ben Cassidy the owner of the Cassidy Mine in the Trego Mining District?)

Overton discusses the mine.<ref>Theodore D. Overton, "B046: Mineral resources of Douglas, Ormsby, and Washoe Counties," B046, Nevada Bureau of Mines & Geology. Includes images of Fly Geyser, the Petrified Forest, Gerlach Hot Springs that are in the collection at UNR.</ref>