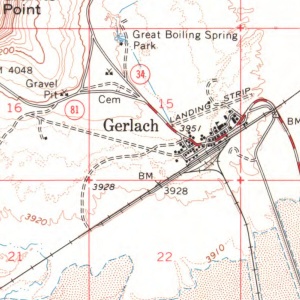 Garside states:"It has been reported that a borax works operated for a short time at Gerlach Hot Springs, but Papke (1976)[1] believes that this information is probably not true. There is not a large amount of boron in the spring water, and no borates can be found at the site."[2]

In 1896, the Weekly Nevada State Journal wrote: "Jim Raser, the Roop County borax king, arrived on the N-C-O last evening fat and jolly as ever".[3]

In 1899, The Nevada State Journal mentioned that borax was found at Deep Hole.[4]

BLM GLO shows that the Lyons Borax Placer was patented in 1910 by W.H. Lyons.[5]

BLM GLO shows that the Gerlach Borax Placer was patented in 1910 by W.H. Lyons.[6]

The 1911 plat map for T32 R23 shows "Borax Mill" near the site of the Great Boiling Springs. Southwest of Gerlach appears the text "Borax Deposits".[7] 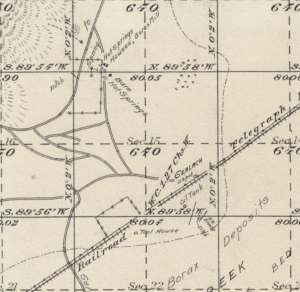 Another 1912 reference states: "Some other deposits of this type were operated in a small way at this time including a small plant established at the Hot Springs near the present site of the town of Gerlach, in Washoe County Nev., when this place was still some hundred miles more or less from its nearest railroad shipping point[9]

The 1914-1915 WPRR Descriptive Time Table states: "The substantial station of Gerlach marks the time change from the Eastern to the Western Division of the Western Pacific Railway. The locality is noted for its group of warm hot springs and their battered adobe fort, at the base of the hills a mile and a half to the right. Amidst high sandstone ridges scored by wind and weather, through soda and borax flats imprinted with antelope tracks the train passes into the lava district of the Black Desert"[10]

Hague and Emmons write about a 1867 visit as part of the Geological Exploration of the Fortieth Parallel: "About 3 miles southwest from Granite Creek Station, and near the southern end of the range, is a group of hot springs known as the Granite Creek Boiling or Mud Springs. Scattered over an area roughly estimated at 75 acres are a large number of pools, mostly circular, varying in size from 1 up to 25 feet in diameter, and surrounded by a luxuriant growth of brilliant green alkaline grasses, in marked contrast to the dull monotonous colors of the desert. The waters are clear and quite palatable when cool. The largest one visited had a temperature of 194° in the broad open pool; others indicated temperatures from 188° up to the boiling point, and yielded large volumes of vapor that could be seen many miles across the desert. Along with these springs are a number of mud springs, or, as they are called, "Mud Volcanoes", round basins from 2 to 3 feet below the surface of the ground and varying from 6 inches to 6 feet in diameter. These were filled with mud and slime, the contents being thrown up and violently agitated at regular intervals, accompanied by puffs of steam. Several of these springs had built up cones of hardened mud, and all, with one exception, closed at the top. In this one, the aperture was about 2 inches in width, and emitted a very perceptible odor of sulphuretted hydrogen; it is said occasionally to throw out mud and water in all directions for a distance of 100 yards. Fragments of this ejected material were found by analysis to have the composition of clay."[13]

In 1973, Deborah Ann Brockelsby (age 19) from Lake Tahoe was scalded to death in one of the small pools (Reno Evening Gazette March 23, 1973, see also March 19 and 20). It was reported that she dove in to a hot pool after mistaking it for the cold pool. The pools were separated by a walkway. [14]

In 1983, owner John J. Casey stopped allowing public access after over a 10-year period, 5 visitors drown or were scalded to death.[15]