Sulphur is a ghost town located on the Western Pacific Rail Road west of the Kamma Mountains.

Sulphur is named for the nearby sulphur deposits, discovered in 1866. Today, the Hycroft Mine is located nearby.

The 1914-1915 WPRR Descriptive Time Table for west-bound traffic stated: "Five miles from Sulphur are located the extensive workings of the Nevada Sulphur Company. On the left is distant and oddly white Calico Range, always of the pale hue."<ref>Descriptive Time Tables, Denver and Rio Grande - Western Pacific, Winter 1914-1915</ref> There could be confusion about left and right here?

Sulphur is at mile post 474.52.<ref>http://www.trainweb.org/WPRRINFO/WPMilePostDetail.html</ref>. To the west is Ronda, to the east is Floka.

See Sulphur Mining District for early histories of the area.

Below are various resources that name residents of Sulphur organized chronologically.

In 1922, a petition to the U.S. House of Representatives was sent and lists residents of Sulphur: "4942 By Mr Arentz Petitions of the Humboldt County Chamber of Commerce and Messrs Born, Cooney, Richardson, Pearce, Wilkinson, Gray, Moore, Defenbaugh and Fishburn of Winnemucca Messrs Crowley, Whitaker, Newland, Stonebaker, Brown, Cushin, Alley, Rolph, Willig, Noble, Swager, Olsen, Brabazon and Webster of Sulphur Nev. protesting against House bill 10598 to the Committee on Interstate and Foreign Commerce" (Bill 10598 seems to have something to do with using the US Mail to promote illegal financial matters?)<ref>"United States Congressional Serial Set, Journal of the House of Representatives," p. 258, April 3, 1922.</ref> 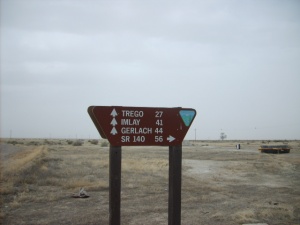 Sulphur Junction about 1/2 way between Gerlach and Winnemuca on Nevada State Route 49 going East from the main highway between Gerlach and Empire. This road is mainly gravel and is suitable for a street bike type motorcycle at a speed of about 30 MPH. There are few, if any sandy spots, unlike the Soldier Meadows Road which has lots of sandy areas. This road travels the South East side of the Black Rock Desert.