Round Hole is a spring on the west side of the Smoke Creek Desert.

Thompson and West (1881) state "Eight miles south of Murphy's is Sheep Head, a station in the desert on the stage road. A spring of water is found here, the only good water in the desert. This stretch of inhospitable land is in some places forty miles wide, and is surrounded by a scant growth of sage-brush and grease wood, while for miles there is no vegetation whatever. Alkali, salt, borax and gypsum are the leading components of the soil, rendering a trip across its arid waste extremely unpleasant. Six miles south of Sheep Head is a spring called Buck, or Bull, Spring, and six miles farther south is Rotten Egg Spring, a name peculiarly appropriate, so extremely disagreeable is the water both to the smell and taste. Round Hole, or Deep Hole, Spring lies six miles more to the south, and the water, although not very pleasant is used for drinking purposes. It is on the above route that the stage road runs, and sixteen miles southeast of Round Hole is Pyramid Lake, on the road now followed by the stage, passing through Pyramid City, and Jonesville, which lie on the line between Washoe and Roop Counties."[1]

Russell (1885) states: "The fault that crosses the western border of Smoke Creek Desert differs from most others in the Lahontan basin in the fact that it traverses the valley at a considerable distance from the mountains. Its course is marked by numerous thermal springs and by a low scarp which at times becomes too indistinct to be easily traced. There is but little question that this line of displacement is a continuation of the fault to be seen at Granite Mountain which apparently comes to view again along the borders of the Black Rock Desert farther northward. The connection between these various fragmental fault lines has not been traced and we have represented on Plate XLIV only such portions as have actually been observed. The course of this fault across the southern portion of Smoke Creek Desert is indicated by a low and somewhat rounded scarp with a nearly east and west strike. The springs along the fracture irrigate the desert sufficiently to admit of the growth of grasses and desert shrubs which mark its course by a line of verdure through the absolute waste. Farther northward in the neighborhood of Sheep Head Spring the fault changes its course and becomes nearly north and south in its trend farther northward still it bends more to the eastward and finally near Round Hole Spring it has an approximately east and west strike. Its course is thus nearly crescent shaped but it has many more irregularities than we are able to represent on the accompanying map On the line of this fault near Buffalo Springs there are a number of tufa piles rising abruptly from the desert to a height of thirty or forty feet which exhibit the three varieties of tufa that are characteristic of the Lahontan calcareous precipitates It is evident that the nuclei of these deposits were formed by subaqueous springs as described in a previous chapter thus showing that the fracture along which they are situated must have existed during the time the desert was occupied by the ancient lake In a few instances the tufa piles situated immediately above the line of fracture have been split from base to summit by a recent orographic movement and are now parted by vertical fissures two or three feet wide into which a person can descend a number of feet lower than the surface of the desert."

A 1892 U.S. Congress record states "There is said to be a white man living at the place designated on the map as "Round Hole Spring" but from all we can learn the place is not very valuable either to the occupant or to the Indians being a cheap stopping place at a spring on the highway with little if any improvements. This is a cattle ranch with cattle principally ranging oft the reservation but these springs furnish necessary water on the reservation."[2] 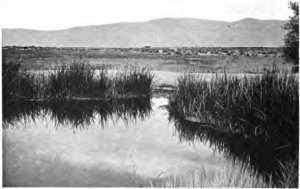