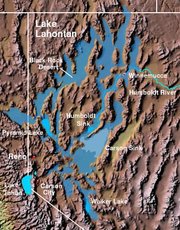 Icthyosaur fossils first found in 1928 by prof. Seimon W. Muller of Stanford 150 miles SE of Reno, dated to this time. An inland sea linked to the Pacific and submerged California and Nevada during the Triassic.

Along the western coastal area of North America it seems likely that for part of the time there was a long, narrow island running parallel to the edge of the continent from Alaska to Mexico. Dinosaurs and marine reptiles have left their bones in this region. The Nevadan orogeny was now under way.

The seas over Nevada receded.

Most of Nevada was a flood plain and supported dinosaurs including the raptor dromaesaur, sauropods, tyrannosauroids and iguanodonts.