"Deposit Said to Be Second Largest on the American Continent"

"[Special Dispatch to The Call] OROVILLE, June 7.—News has been received in this city of the discovery of large niter deposits in the Calico hills, about 18 miles from Gerlach, a division point on the Western Pacific. The discovery was kept a secret until the niter was passed upon by a representative of the United States geological survey. He pronounces it to be of exceptionally 'fine quality.' The deposits cover an area of 65 acres and are said to be the second largest deposits in the Americas, the largest, being In Chile. Representatives of dynamite and powder manufacturing companies are said to be interested in the development of the field[2]."

Note that the location is more accurately stated as being in the Granite Range or Hog Ranch Mountains, not the Calico Hills.

"Potassium nitrate north of Gerlach. An occurrence of almost pure potassium nitrate in natural form has been found in the northern part of the Granite Range, Washoe* County, Nev. (See index map, PI. I.) The claims were visited in October, 1911, by George Otis Smith, Alfred H. Brooks, and the author. The locality is in T. 37 N, R. 22 E., and is reached by road and trail from Gerlach, a station on the Western Pacific Railway. The route from Gerlach lies north along the western margin of the Blackrock Desert for about 12 miles, thence northwest across a large alkali flat at the east base of the Granite Range, and thence, following tributary drainage, to Leadville, a mining camp near the northern end of that range. From Leadville the route followed was by trail across the divide and down the western flank of the range to the prospected ground, which is about 3 miles distant and 1,400 feet lower than the place where the trail crosses the crest of the range. Figure 2 shows the location of the claims. The niter salts occur under ledges and in cavelike cliff formations in a canyon on the upper waters of Grass Valley Creek, an upper tributary to Little Highrock Canyon. (See PL II.) A small amount of exploratory prospecting has failed to reveal much more of the character of the deposit than shows at the surface. It is, however, essentially similar to that at Lovelock and elsewhere." 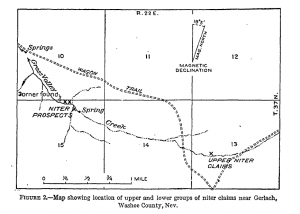 "The niter is found as a white crystalline salt in crevices and concentrated in veins in the slide rock at the base of the cliffs, partly or wholly in positions protected from leaching by rain, snow, or surface waters. A collection of samples representing the salts, or supposedly saline-bearing material, was made at points indicated by crosses on the map (fig. 2). Analyses follow:"

Analyses of niter samples from deposits north of Gerlach, Nev

"Nos. 1 and 2 come from the upper nitrate claims; No. 1 is from a sugary siliceous-like seam in rhyolite lava exposed in a cliff on the north side of upper Grass Valley Creek (W. sec. 13, T. 37 N., R. 22 E., Nev.); and No. 2 is supposed bat guano from upper corner under cave near seam from which No. 1 was taken. Nos. 3 to 9 are from the lower claims. No. 3 is a white crystalline salt from a seam about 3 inches thick, occurring in soil and slide rock at base of an overhanging cliff of rhyolite lava in the lower canyon of Grass Valley Creek (near middle of north side sec. 15, T. 37 N., R. 22 E.). No. 4 is a blackened coating staining the cliff face near the locality of No. 3, supposed to be a leaching from bat guano. No. 5 is a white Crystalline salt dug from a fissure in the face of the cliff about 50 feet west of the locality of No. 3. No. 6 is a specimen of shattered rhyolite rock collected from a prospect pit near a blast hole in the same locality as Nos. 3 and 4. No. 7 is a brownish or blackened earthy deposit from a fissure in the face of the cliff, -containing many rock fragments, near the locality of Nos. 3 and 4. No. 8 is an iron-stained rhyolite rock, containing salt in seams and cracks, taken from a brecciated cliff in the forks of Grass Valley Creek about 200 feet east of the locality of No. 3. No. 9 is from a prospect pit on the south side of Grass Valley Creek, just above the forks of the creek and about 600 feet east and a little south of the quarter section corner on the north side of sec. 15, T. 37 N., R. 22 E. It consists mainly of rock fragments fragments with no evident coating of salts."

"In considering these analyses from a commercial standpoint it should be borne in mind that the samples containing the richer salts are all selected samples, representing only what appeared to be the very best material that was available in the prospects, and that there is as yet no really sufficient evidence that the quantity now in evidence can be much increased by further development." 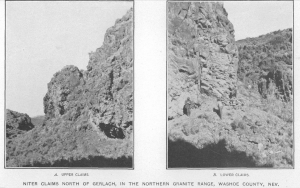 "These analyses show that the water-soluble portions of the purer salt samples (3 and 5) are essentially pure potassium nitrate in natural form, the insoluble impurities being chiefly earth or rock fragments accidentally included in scraping up the samples. Such a salt in merchantable quantities would be worth about $65 a ton in eastern markets. As the potassium oxide of a pure potash niter constitutes 38.7 per cent of the salt and the nitrate radicle the remainirg 61.3 per cent, it appears that the water-soluble portions of samples 3, 5, 6, 7, 8, and 9 consist chiefly of potassium nitrate with a relatively small proportion of sodium nitrate."

"The sample of guano shows a potassium content, but has little nitrogen in nitrate form. It contains soluble nitrogen in the form of ammonia, and probably also in the albumenoid form, but the latter was not chemically determined."

"The country rock in the vicinity of the Gerlach niter prospects consists almost entirely of acidic volcanic lavas showing vesicular, ropey, and flow structures exposed in many places in cliffs and ledges. Glassy obsidian is found throughout the area as fragments in soil that covers the hill slopes, as well as in layers intercalated with other forms of the flow rock. The country rock is probably rhyolite."

"It has been generally assumed by those interested in the development of these deposits that the nitrate salts are formed by leaching from the country rock and that they accumulate or are preserved in places protected from the weather. On the basis of this assumption it has been supposed that some portions of the bedrock may be sufficiently rich in niter to be mined or quarried and treated directly for recovery of the salts. However, the fact that the salts are nearly always observed in ledges and cliffs which have been and now show evidence of being inhabited by bats or other nest-building animals leads to the very strong suggestion that the origin of the niter is to be found in comparatively recent organic agencies. If the niter salts have originated through decomposition of bat or other guano at the surface of the ledges alone, the deposit 'can scarcely be of sufficient extent to be of much commercial value. (As to origin see also p. 30.)"