Mazuma is a ghost town located in the Seven Troughs Range. 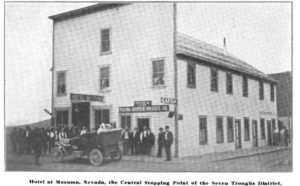 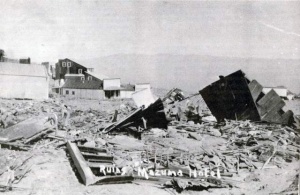 Ruins Of The Mazuma Hotel 1912

"Yesterday afternoon, at about five o’clock, the town of Mazuma (northeast of Reno) was devastated, eight people were drowned and nine more injured, many fatally, and a property loss estimated at nearly $200,000 by a cloud burst that swept down, unheralded, upon the mountain town. The known dead are:

Three children of Wm. Kehoe, all aged under seven;

Those injured so far as can be learned at time of going to press are:

Mrs. Kehoe, cut about head and face, bruised about body, may die;

Today the first witnesses of the flood conductions and who talked to the survivors returned to town. Among them was Drs. Russell and West, H.J. Murriah, J.T. Goodlin, H.S. Riddle, Jack and Will Borland and W.H. Copper.

One and all they tell a thrilling story of the flood. When the water reached Mazuma,it was 20 feet high and 150 feet wide. The downpour was general in the Seven Troughs Range, in which the towns of Mazuma and Seven Troughs are located. The fact that one woman was drowned in Burnt Canyon and that Stone House Canyon was thoroughly gutted, show that the cloud burst extended over a distance of ten miles.

In Seven Troughs Canyon, just before the flood came, there was a heavy down pour of rain, which was followed by heavy rumbling sounds and almost complete darkness. The main of water had fallen in the drainage area of the Seven Troughs Canyon and it gradually converged into the narrow canyon walls. It reached momentous proportion and became irresistible, sweeping all before it, toying with large two story buildings as though they were chips of wood, overturning everything that came in its road. For ten minutes, it raged, a mighty torrent, while the frightened people gazed on it, helpless on the hillside.

The only warning the people of Mazuma had that the flood was upon them was the attempt that clerk Stevens of the Preston store of Seven Troughs made to telephone Mr. Preston at Mazuma. The electrified atmosphere caused the telephone to work improperly and all that Mr. Preston could understand was the word water. It was only a few seconds later that heard the roar and beheld the flood. John Trenchard had just remarked to his wife that it looked like it was going to rain as he started for the front door of the store."

Davis (1913) wrote" "Mills were built at Mazuma and Seven Troughs, the latter by the Seven Troughs-Coalition mining company of which L. A. Friedman is President and General Manager, and the former by the Nevada-Darby Mining and Milling Company. July 17th 1912, the towns of this district were devastated by a great water-spout, washing away buildings, mills, people, and leaving a path of desolation and suffering in its wake. Nine were killed outright, three others succumbed to wounds, and several were severely injured in the flood, and the property loss was estimated at a quarter million dollars. The district has never fully recovered from this great disaster, though work has been steadily prosecuted on most of the mines and the mills have been repaired and in operation."[1]

Sybil Huntington recounted her experience of the flood.[2]

Blarcom (1916) writes: "In the Seven Troughs district in addition to the Coalition the Delaware Mining Co of Vernon is putting ore through the old Darby mill and shipping between $5000 and $6000 in bullion every month. The Hahn & Snyder lease on the Signal Peak property at Seven Troughs is running a small stamp mill with a production ranging from $1500 to $2000 a month while a number of leasers are shipping ore from the Fairview property of the Seven Troughs Mining Co."[3]

Young (1918) writes: "The sixth plant Fig 5 is the mill of the Darby Reduction Co at Mazuma. It is probably the best attempt of those illustrated to provide an adequate plant for a small district. The mill was equipped with an automatic sampler of the Vezin type ten 1000 lb stamps, a 4 x 17 ft tube mill, Dorr classifier, amalgamating plates, four agitators and an Oliver filter. It contained practically all of the elements of a successful custom plant and was well designed and constructed. What its success has been and how well it has served the Seven Troughs and Mazuma district I am unable to say but details of its past history and present position would be interesting. Someone familiar with the enterprise should present it to readers of the Journal."[4]

However, the May 21, 1921 Mining and Scientific Press states: "Lovelock. The old Darby mill at Vernon has started up milling ore for the Seven Troughs Mining Co on a former contract that was never finished Brook Hartley is superintendent."[6]