In 2016, there was interest in lithium because the Tesla Megafactory was being built in Nevada.

In Nevada, lithium has been extracted from brine in Silver Peak, Nevada since 1966. Exploration for new lithium sources have focused on brine sites that are in closed basins surrounded by volcanics.<ref name="Umbral"/> The San Emidio Desert, may have a lithium brine deposit that is economically viable.

Some of the claims are in the San Emidio Desert, which technically is part of the Black Rock Desert.

In 2003, the BLM wrote: "Lithium: Based on the anomalous occurrences of lithium noted in the east arm of the Black Rock Desert and north of Gerlach on the playa (Nash 1996) it is believed that the South Playa Area has medium potential. Volcanic rocks and related sediments near calderas ring fractures and moat sediments are also of medium potential other volcanic rocks are considered low potential. These types of rocks occur in the Lahontan cutthroat trout Area"<ref>BLM, "Black Rock Desert-High Rock Canyon Emigrant Trails National Conservation Area and Associated Wilderness, and Other Contiguous Lands in Nevada, Resource Management Plan: Environmental Impact Statement, Volume 1," 2003.</ref>

Nash 1996 does not say anything about anomalous occurrences. Nash 1996 states:

"Geologic setting: Lithium-rich clay minerals (hectorite) form by diagenesis or hydrothermal alteration of volcanic glass. Optimum conditions are created where alteration is within a closed basin formed by block faults or caldera ring faults. At McDermitt caldera, highest concentrations of lithium are in caldera moat-filling volcaniclastic sedimentary rocks. Lithium is postulated to be leached during alteration and concentrated in the basin, eventually becoming incorporated in hectorite. Age is Tertiary to Recent."

"Another setting for lithium deposits is possible in the WSRA: Li-rich playa brines. These are known from playas elsewhere in Nevada (as near Silver Peak) and are a major by-product source of lithium at Searles Lake, CA."

"We have insufficient information to evaluate this potential environment that possibly would pertain to playas in the western and southwestern parts of the study area (Black Rock Desert, Humboldt, and Carson sinks)"

"Economic factors: The volcanic-dominated basins possibly would produce by-products such as Hg, U, zeolites, and clays. However, such by-products can contaminate Li-rich clays and limit their applications. Despite Li concentrations as high as 0.68 percent, technology for large-scale extraction of Li from hectorite has not been developed. A large production facility would need to be close to good transportation facilities for either Li-clay or a Li-salt produced at site."

"Assessment: The permissive tract is Tertiary volcanic rocks, as for diatomite and clay deposits. The more favorable areas would have normal or ring faults to create grabens or caldera moats and to focus alteration and solutions; intrusive plugs along those 12 bounding faults drive fluid flow. The McDermitt caldera is the best structural setting for these deposits; other postulated calderas in the WSRA do not have well developed moats. References: Asher-Bolinder, 1991; Rytuba and Glanzman, 1979"<ref>J. T. Nash, "Resource Assessment of the US Bureau of Land Management's Winnemucca District and Surprise Resource Area Northwest Nevada and Northeast California Resource of Industrial Rock and Minerals," USGS Open File Rept 95 271, 1996.</ref> 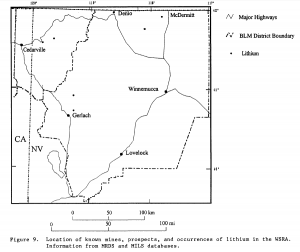 Location of known mines, prospects, and occurrences of lithium in the WSRA. Information from MRDS and MILS databases. (From Nash 1996)

Bohannon states "The purpose of the sampling program was to determine if areas of anomalous lithium could be recognized by reconnaissance surface sampling. The results, however, have been indeterminate because most large lithium deposits occur at depth and appear to be formed when deeply buried. Many may not manifest themselves at the surface at all . Nonetheless, the data derived during the surface sampling program will be presented in this report."