Hess and Larsen (1921) writes: "FA Anderson has a group of claims covering tactite deposits on the south end of the main ridge of the Juniper Range in secs 19 and 30 T 25 N R 26 E. The point overlooks the between the Juniper and Nightingale ranges and the workings the east side of the Nightingale Range about 6 miles away are plain sight. The claims were formerly located for copper and a shaft was sunk in the diorite in which to judge from the dump several hundred feet of workings must have been driven. A couple of good cabins have been erected. The scheelite deposit is in vertical thin bedded limestone and hardened shale probably the same rocks as were elsewhere called Jurassic by the Fortieth Parallel Survey. It crops out for about half a mile striking N 50 E At the southwest end nearest the cabins the ore body is about 6 feet wide and the sediments are wholly altered to a mass of dark red brown garnet dark green epidote iron oxide formed by the weathering of chalco pyrite finely acicular actinolite quartz calcite and scheelite. The metamorphism lessens toward the northeast and at the northeast end where the limestone bed is thinner only about one half of it is thoroughly metamorphosed. At the southwest end the ore is at least as rich as any tactite seen elsewhere by the writers. The scheelite is in pieces as much as 2 1/2 inches or possibly more in longest dimension and some of it shows fair crystal form with a tendency to form crystals whose cross sections are rectangles. The scheelite is naturally pure white but is largely stained green by malachite. Toward the northeast end it occurs in very small particles. The scheelite follows the bedding planes and a piece of tactite 2 inches thick may have a good crust of scheelite on one side and very little on the other Several holes from 6 to 50 feet deep have been dug at different places and probably 30 tons of ore had been mined when the deposit was visited July 7 1917. The nearest water is at Linton's well 5 miles west."[1]

Vanderburg (1936) notes that water for the mill is from "Linton's wells," which is one mile to the east[2].

Smith (1942) writes: "In this region and at the altitude of the district, which ranges from 5,500 to 6,500 feet, winter is rarely severe enough to impede mining or transportation for more than a day or two at a time. The dryness of the climate, however, severely limits the water supply, and although Linton Well, a mile east of Nightingale, has always hitherto provided ample water for camp needs and has supplied the tungsten mill during short periods, its capacity to supply water for continuous milling has never been adequately tested."[3]

East (1950) writes that the Nightingale Mine got its water from Linton's well, which was located 3/4 of a mile from the mine. Water was pumped through a 3" pipe to a storage tank on the hill. Drinking water was transported in barrels[5].

Shamberger (1973), mentions a "C. C. Linton" as being the secretary-treasurer of a firm possibly associated with Seven Troughs.[6]. 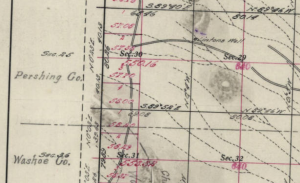