Difference between revisions of "Lava Beds" 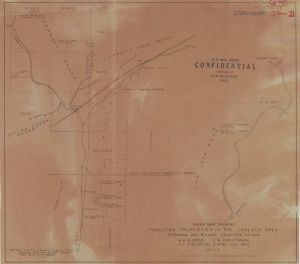 Tungsten Properties in the Gerlach Area (1943).[2] The location of The Lava Beds and Hilltop Tungsten Mine are shown.

Hess and Larsen (1921), describe tungsten deposits in the area: "THE LAVA BEDS NEV The Lava Beds is the strangely inappropriate name by which is now known the range south of the Black Rock Desert and 45 miles northwest of Lovelocks called by the Fortieth Parallel Survey the Pahsupp Range. Pahsupp may not be a euphonious name but so far as has been ascertained there is not a pebble of lava in the range The Fortieth Parallel Survey shows the range except for two small strips that it determined as Jurassic on the east side to be made wholly of granite. The brief observations of Mr. Hess accord with this determination."

"The mountain group consists of a steep walled range running nearly due north and rising less than 1,000 feet above the plain. It presents a nearly straight line on the east but spreads out in rounded gently sloping hills for 8 or 10 miles on the west. At its south end the eastern part of the range is separated by a valley from a western group of hills. The scheelite deposits examined are on the east side of this valley and are scattered from the base to the top of the range."

"The locality is reached by automobile from Lovelocks by way of Seven Troughs. To Seven Troughs the road is good on account of the gold mines. Without climbing to the now nearly deserted town the road skirts the east side of the Seven Troughs Range then rounds its north end and thence goes west and south to Hannan's cabin and spring on the east side of the Lava Beds. The automobile must be left there and a dim trail is followed over the ridge a steep climb of about 900 feet vertically. In a direct line the deposits are about 12 miles northwest of Seven Troughs but the distance is estimated as 35 miles by road most of which is poor. Seven Troughs is about 35 miles from Lovelocks."

"On the summit and at several points a short distance down the west slope are patches of dark green spongy epidote with grayish quartz and slightly grayish scheelite in biotite monzonite. These patches are evidently metamorphosed parts of the monzonite. Single epidote crystals are more than an inch thick though most of them are much smaller On both sides of a small valley which from the shrubs surrounding a spring in it is called Willow Gulch, are other outcrops of tactite most of which are altered limestone and contain a great deal of dark gray green hornblende in small needles. Other spots are largely reddish brown garnet. Visible scheelite is found only in the coarser textured parts of the rock."

"Scheelite has in part at least come into the deposits after the formation of the epidote and has formed in cracks in dark green epidote masses that replace the granite. In one specimen a crystal with edges of about 1 inches and a breadth of more than 2 inches has a thickness of perhaps 0.02 inch. In some dark garnet rock scheelite in brilliant light honey yellow crystals the size of peas is distributed along a plane that probably represents a bedding plane."

"The largest deposits are on the south side of the gulch. Monzonite breaks through and surrounds patches of thin bedded limestone and limy shales which are very unevenly metamorphosed to quartz garnet actinolite hornblende and epidote. The garnet is mostly in streaks of dark brownish red at most a few inches thick following bedding planes or cracks and may show crystal form some epidote also shows good terminations. Scheelite occurs in the tactite in pieces as much as 2 inches in diameter but mostly much smaller visibly following planes in the garnet or in quartz. The mass of the rock contains no visible scheelite and probably mill runs alone can determine the average content."

"The extent of the deposits is uncertain as the rocks are partly covered by soil. There are apparently two principal inclusions of limestone on the south side of Willow Gulch with a length of some hundreds of feet interrupted by dikes of monzonite and an exposed width of at least 25 feet. Part of the monzonite near the deposits is prominently sheeted in plates 2 to 6 feet thick dipping 50 degrees N 40 degrees W."

"About a mile west southwest of Willow Spring is a tactite mass on the point of a hill 150 feet above the gulch into which Willow Gulch empties. Here brown garnet and epidote form streaks 1 to 12 inches wide and 1 to 2 feet apart in the less coarsely metamorphosed limestone. Very little scheelite is visible."

"Less than a mile south along the same gulch between 1 and 2 miles southwest of Willow Spring a patch of tactite occupies the point of another hill and is surrounded by rotten monzonite. The patch may be a couple of hundred feet long but is narrower. The visible scheelite seemed to be confined to streaks of epidote and quartz."

"Other deposits were said to exist farther west in the hills but they were not visited by either of the writers."

"Exploitation of the deposits would be difficult but should the price of tungsten again reach more than $25 a unit they would be worthy of more careful examination."

"Besides Willow Spring there is another small spring half a mile below in the same gulch. Sheephead Spring 3 miles to the north is said to be larger.

"The Western Pacific Railroad may be reached at Cholona, 25 miles to the northwest It is said that a road to Cholona can be cheaply and easily constructed and the part of the country seen bears out this statement."[4]