Hummel (1888) writes: "WINNEMUCCA LAKE Lying parallel to Pyramid Lake and a little to the east of it is Winnemucca Lake the largest body of water in the State extending north and south sixty miles and north and south twelve miles. With Pyramid Lake it shares the water of the Truckee River The surrounding mountains are low and regular yet their geology is interesting and their sides are used as stock ranges. Winnemucca Lake is the home of the silver trout a fish not to be excelled the world over for beauty. When taken out of the water he looks like the highest perfection of the silversmith's art. Winnemucca Lake will one day be a famous resort as the piscatorial sport to be had here cannot be beaten. Felix McCormack the host here took us out on the lake not long ago and with trout as bait caught eighteen two pound fish in ten minutes with a single line five feet in length. To understand this record the reader must remember that minnow is the regulation bait McCormack has a fast team plenty of fishing tackle and a dozen good boats."

"Twenty five years ago Winnemucca Lake nearly dried up and became at an immense lake of soft mud. During the time it was in this condition it was called Mud Lake and by that name it is best known to day. McCormack's place at the mouth of the slough one could easily ford twenty years ago whereas now at this point there is a width of 100 feet a depth of 50 feet. Farther down the shore this lake Andy Russell and other stockmen built a stone corral which is now twenty feet the surface of the water. On the western was a piece of land containing about 500 acres meadow and salt grass which is now all water. The cause of this change of surface is sawdust and other waste material which is dumped into the Truckee river by the sawmills and carried along to the mouth of the river at the of the lakes where it is deposited and forms bar. A quarter of a century ago such a dam formed and cut off the water which went into Winnemucca Lake and all the water flowed Pyramid Lake. The result was that Pyramid Lake grew larger and larger and Winnemucca Lake nearly dried up. The high water of Pyramid at last backed far enough to burst the barrier and restore Winnemucca Lake. What happened twenty five years ago is happening to day only the inlet to Pyramid Lake is nearly closed and it is growing smaller and smaller. If allowed to it will dry up for a time within the next ten years if the inlet is not cleared by artificial means. The Indians realize this and are trying to prevent it by building a wing dam."<ref>N.A. Hummel, "General history and resources of Washoe County, Nevada, published under the auspices of the Nevada Educational Association." archive.org, p. 21-22, (1888)</ref>

In 1888, W. D. C. Gibson, announced that he had taken over McCormack's and intended to open a resort and trading post.<ref>"Stories from the files Forty Years Ago Today," Reno Evening Gazette, July 21, 1928.</ref> 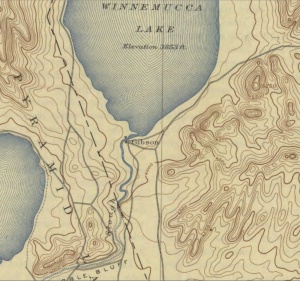 Gibson, Nevada. Located at the southern edge of Winnemucca Lake.