Farrell is the site of a former town located 25 miles northwest of Lovelock and seven miles from Vernon.[1]

Carlson states that Farrell was named either for William F. (Bill) Farrell or Jack Farrell (mine owner)[1]

Davis (1913) wrote: "Seven Troughs is chief among the mining camps developed during the later years. It is situated in the Stone House range of mountains, thirty miles west from Lovelock. It was discovered in the fall of 1905, Wm. Stautts, Frank Crumpacker, Joe Therien, and Alex. Borland, all of Lovelock, being among the first to secure locations in the canyon. It derives its name from a series of seven troughs which had been placed below some springs in the canyon by stockmen for watering stock. The water was brought to the surface by a large black basalt dike which cut through the mountain, crossing the canyon at this point, and along which contact the ore was found. From this central location the ledges were traced to the north and south. Farrell, in the Stone House canyon, being at the northern extremity and Vernon at the southern end of the district, an extreme distance of twelve miles. Soon the fame of this new discovery spread to the southern camps of Tonopah and Goldfield and prospectors and mine operators came from those camps in great numbers. The entire district was soon covered with monuments and great things were predicted for the new bonanza camp. Four towns, Vernon, Mazuma, Seven Troughs and Farrell were established, each gaining quite a population and considerable activity was evidenced throughout the entire district. Mills were built at Mazuma and Seven Troughs, the latter by the Seven Troughs-Coalition mining company of which L. A. Friedman is President and General Manager, and the former by the Nevada-Darby Mining and Milling Company. July 17th 1912, the towns of this district were devastated by a great water-spout, washing away buildings, mills, people, and leaving a path of desolation and suffering in its wake. Nine were killed outright, three others succumbed to wounds, and several were severely injured in the flood, and the property loss was estimated at a quarter million dollars. The district has never fully recovered from this great disaster, though work has been steadily prosecuted on most of the mines and the mills have been repaired and in operation. It is estimated that this district has produced a million dollars up to the present time, the greatest depth reached in the workings being eight hundred feet. Much ore is now blocked out in the district and the production era has but just begun."

"To the south of the Seven Troughs, and in the same ore zone, are situated the camps of Velvet, sixteen miles west from Lovelock ,and Jessup, twenty-four miles southwest of Lovelock. Neither of these camps have reached the producing stage, though very good values and extensive ore bodies are being developed in both. In the Sahware range of mountains, next west of the Stone House range, is located the Juniper mining district. This is thirty-five miles west of Lovelock, in the extreme western part of the county. The Nevada Development company, of which Mr. J. T. Reid is resident agent and with him has New York capital associated, is developing promising copper deposits in this district."[2]

"Farrell, The Headquarters of the Northern Portion of The Seven Troughs District". (ca. 1908) 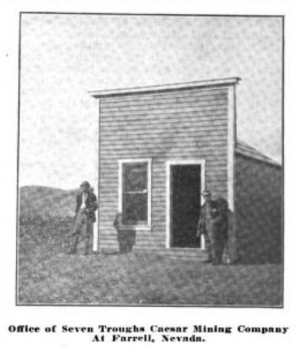