Double Hot Springs is locate to the west of the Black Rock Range and north of Black Rock Springs.

In 1877, Hague and Emmons wrote "It is interesting to observe in this connection that the abundant hot springs which occur in these hills are almost invariable found on the edge of the desert along the western foot of the mountains. Of these, the group of Warm Springs, locally known as the Double Hot Springs, about 6 miles from the sourthern point, consists of two adjoining pools about 15 or 20 feet in diameter and apparently about as many deep, with other smaller pools in the vicinity, from all of which there is only a small overflow of water. The water has no perceptible taste, but it has a very high temperature, that of the larger poos at the surface being 165 deg to 168 deg F, while one of the smaller pools gave a temperature of 171 F (78 C). Probably below the surface the temperature is very near the boiling-point."

Garside reports that the temperature of the furthest south spring is 202F, which is near boiling at the altitude of the springs.

In 2000, Lisa O'Shea died a few weeks after she jumped in to Double Hot to save two dogs. Andy Crowell survived, though he had second and third-degree burns over 80 % of his body.

O'Shea's mother sued the BLM for wrongful death for $15 million and eventually settled for $1 million. 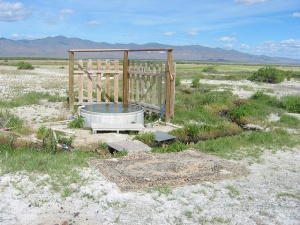