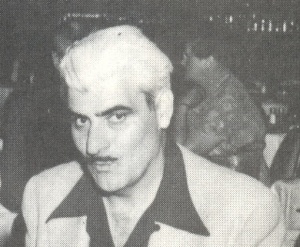 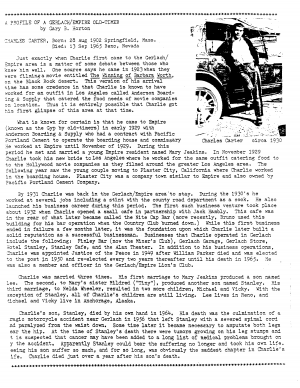 Biography of Charles Carter, by Gary B. Horton

A PROFILE OF A GERLACH/EMPIRE OLD-TIMER

by Gary B. Horton

Just exactly when Charlie first came to the Gerlach/Empire area is a matter of some debate between those who know him well. One source says he came in 1923 when they were filming a movie entitled The Winning of Barbara Worth, on the Black Rock desert. This version of his arrival time has some credence in that Charlie is known to have worked for an outfit in Los Angeles called Anderson Boarding & Supply that catered the food needs of movie companies on location. Thus it is entirely possible that Charlie got his first glimpse of this area at that time.

What is known for certain is that he came to Empire (known as the Gyp by old-timers) in early 1929 with Anderson Boarding & Supply who had a contract with Pacific Portland Cement to operate the boarding house and commissary. He worked at Empire until November of 1929. During this period he met and married a young Empire resident named Mary Jeakins. In November 1929 Charlie took his new bride to Los Angeles where he worked for the same outfit catering food to to the Hollywood movie companies as they filmed around the greater Los Angeles area. The following year saw the young couple moving to Plaster City, California where Charlie worked in the boarding house. Plaster City was a company town similar to Empire and also owned by Pacific Portland Cement Company.

By 1931 Charlie was back in the Gerlach/Empire area-to stay. During the 1930's he worked at several jobs including a stint with the county road department as a cook. He also launched his business career during this period. The first such business venture took place about 1932 when Charlie opened a small cafe in partnership with Jack Hambly. This cafe was in the rear of what later became called the Nite Cap Bar (more recently, Bruno used this building for his bar operation when the Country Club burned down,) While this first business ended in failure a few months later, it was the foundation upon which Charlie later built a solid reputation as a successful businessman. Businesses that Charlie operated in Gerlach include the following: Finley Bar (now the Miner's Club), Gerlach Garage, Gerlach Store, Hotel Stanley, Stanley Cafe, and the Alan Theater. In addition to his business operations, Charlie was appointed Justice of the Peace in 1949 after William Parker died and was elected to the post in 1950 and re-elected every two years thereafter until his death in 1965. He was also a member and officer in the Gerlach/Empire Lion's Club.

Charlie was married three times. His first marriage to Mary Jeakins produced a son named Lee. The second, to Mary's sister Mildred ("Tiny"), produced another son named Stanley, His third marriage, to Nelda Wheeler, resulted in two more children, Michael and Vicky. With the exception of Stanley, all of Charlie's children are still living. Lee lives in Reno, and Michael and Vicky live in Anchorage, Alaska. (Note: Lee has since died) Charlie's son, Stanley, died by his own hand in 1964. His death was the culmination of a tragic motorcycle accident near Gerlach in 1956 that left Stanley with a severed spinal cord and paralyzed from the waist down. Some time later it became necessary to amputate both legs near the hip. At the time of Stanley's death there were tumors growing on his leg stumps and it is suspected that cancer may have been added to a long list of medical problems brought on by the accident. Apparently Stanley could bear the suffering no longer and took his own life. Seeing his son suffer so much, and for so long, was obviously the saddest chapter in Charlie's life. Charlie died just over a year after his son's death.

Many thanks to Gary B. Horton for graciously allowing reproduction of the above text. Mr. Horton is Charlie Carter's grandson.